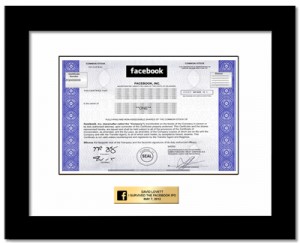 I bought shares of Facebook yesterday on its opening day on the market after its initial public offering (IPO). Well…it was actually more like one single share of Facebook. I bought it from OneShare.com

It all started on Thursday when my wife asked me if I was going to purchase any shares of Facebook on Friday when shares began trading on the public market. My wife and I do not really see eye to eye in most cases about finances and investing. She loves the idea of Facebook as a company but does not really care to look at the fundamentals of the company as an investment.

While Facebook may be a great company and website that over 900 million users enjoy using, it also may be a poor investment at these price levels. Here are a couple of things to consider when looking at the company’s fundamentals.

Facebook’s IPO almost certainly represents a poor long-term investment at or above the IPO price of $38 per share. That is why I am not buying a large amount of shares for my investment portfolio. But, that has not stopped me from buying a single share for my wife as a gift.

The owner is entitled to annual reports, declared dividends and any other shareholder perks just as you would if you had bought the shares through a discount broker making this an everlasting gift that is interesting and educational. GiveAshare.com has companies that fit all gift-giving occasions.

Should you buy Facebook IPO? Did you buy shares of Facebook on Friday? Are you going to buy shares next week?