The following is a guest post is by Professor William Birdthistle, author of the new book, “Empire of the Fund: The Way We Save Now“. You can find out more about Professor Birdthisle and his book at EmpireOfTheFund.com.

Empire of the Fund is an examination of the way we save now.  For a video précis of the book, here is a short trailer:

Over the past thirty years, America has embarked on a grand experiment – perhaps the richest and riskiest in our financial history – to change the way we save money.  The hypothesis of our experiment is that millions of ordinary, untrained, and busy citizens can successfully manage trillions of dollars in a financial system dominated by sophisticated investments firms – firms that on many occasions have treated investors shabbily.

As ten thousand baby boomers retire from the workforce each day and look to survive for almost two decades largely on the mutual funds in their individual accounts. We will soon learn whether our massive experiment has been a success.  And if not, we will soon also discover just how large the costs of failure will be.

Three Solutions to Save Our Savings – Empire of the Fund

The End of Pensions 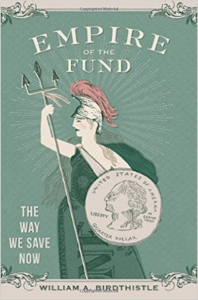 A generation ago, large numbers of Americans enjoyed the support of pensions offered by their employers.  Pensions, of course, guarantee their beneficiaries a steady stream of payments from their retirement until their death.  Together with the benefits of Social Security, pensions provided secure retirements to millions of working Americans.  The golden age of the pension, however, is effectively over.  And it may never have been all that gilded, as not once in the past thirty-five years did more than 40% of American workers ever participate in such a plan.

Today, the benefits of Social Security and pensions are alarmingly inadequate.  The average monthly benefit for retirees from Social Security is now $1,335, or just over $16,000 per year.  Pensions, meanwhile, have rapidly disappeared from our economic ecosystem: public pensions are underfunded by trillions of dollars, and the number of U.S. private-sector workers covered solely by pensions has fallen to just 3%.

Americans in the future will have to support themselves far more on the success or failure of their personal investment accounts.

We as a nation have chosen to entrust our savings not to large pools overseen by professional asset managers but instead to the smaller, individual accounts of almost 90 million investing amateurs.  In the argot of the investment world, Americans are losing defined benefit plans, such as pensions, and are being directed into defined contribution plans, such as 401(k)s.

The rise of these individual accounts has, in turn, funneled large amounts of retirement savings – more than $6.9 trillion – into one of the most popular investment options in personal accounts: the mutual fund.  American investments have built an empire of 8,000 funds holding more than $16 trillion.

The way we save now may enable some Americans to earn comfortable returns in the years ahead, but is also likely to leave many others disappointed.  Though mutual funds and 401(k) retirement plans may feel familiar to many of us, in fact they present of a number of challenges and dangers to lay investors.

Our Poor Results With Mutual Funds

The primary consequences of our new approach, for instance, are that ordinary Americans now find themselves responsible for deciding whether to enroll in an investment account, what amount of each paycheck to contribute to that account, and how to invest those savings successfully for up to forty years of a career and for decades more in retirement.  As Thomas Friedman observes, “It is a 401(k) world”: “Government will do less for you.  Companies will do less for you.”

Though the rhetoric of individual choice may appeal greatly to the American psyche, this change also brings personal liability for getting any of these difficult decisions wrong.  And we are getting them wrong:  approximately one-third of U.S. households currently have no retirement savings at all.  Of the remaining two-thirds, those who have accumulated nest eggs have enthusiastically vouchsafed them to the mutual fund.  So if there are any problems in that particular basket, American investors will find themselves extremely exposed to those vulnerabilities.

Empire of the Fund illustrates many such problems with mutual funds, including their structural vulnerabilities, the perverse incentives of fund managers, and the litany of litigation that has bedeviled the investment industry.

Three Solutions to Save our Savings

To protect the financial security of Americans, Empire of the Fund proposes a trio of solutions: opening the Thrift Savings Plan to all Americans so more investors can benefit from a low-cost, well-run savings plan; imposing a licensing regime upon 401(k) investments in actively managed and other non-default fund elections; and encouraging stronger enforcement by the SEC of the small but extremely high-fee funds that private plaintiffs lack the financial incentive to sue under Section 36(b) of the Investment Company Act.

What do you think? Is there a better way for us to save for retirement? Should we be managing our own money and investments?

William Birdthistle is a professor of law at Chicago-Kent College of Law, where he specializes in investment funds and corporate law. You can follow him on Twitter @WABirdthistle.