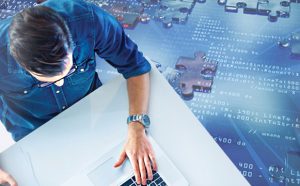 Technical online Forex traders use a variety of strategies in the pursuit of profitable currency pair trades. Some of these strategies have proved effective over time, have been adopted by many traders, and even have colorful names so that traders can rapidly understand what another trader has done in terms of executing a trade. One of these colorfully named strategies is the “fishing strip strategy.”

1. Apply the Bollinger band indicator to the price chart. Set the indicator on the chart to show a 20-period channel. The upper and lower bands of the channel will show the price fluctuation for the past 20 price bars or candles. The indicator should be set for two standard deviations.

Setting it higher than two will cause the upper and lower price bands to be further apart. Setting it under two will result in a narrower channel. The channel resembles a meandering stream, with the upper and lower lines representing the banks of the stream. A middle line, if selected, represents the stream’s current. Most trading platforms have two standard deviations as a default setting.

2. Wait for a signal. A selling signal is generated when a bar or candle closes above the upper band. A buying signal is generated when the bar or candle closes below the lower band. A trade is not entered until prices confirm that they are returning to a level inside the channel. Traders should wait for the start of the third bar or candle, counting the one that broke the channel, to confirm an entry into the market, which can then be executed with a market order.

Many experts recommend using 15 minutes as the minimum time frame for the strategy. On a 15-minute chart, a 20 period setting in the Bollinger band indicator will be showing 300 minutes of trading time.

Longer time frames will supply better signals, so using the strategy on a four-hour chart for longer trades could have a higher percentage of successful trades as 80 hours of trading would be displayed on the chart. The fishing strip strategy can be used for all currency pairs, but most professional traders seldom venture outside pairs formed by the major currencies. Exotic currencies carry a degree of volatility that adds an extra element of risk.

The fishing strip strategy is not perfect. A buy or sell signal could set up perfectly, only to have prices encounter an area of support or resistance resulting in stagnant prices or a severe reversal against a position.

AlfaTrade is an ECN broker traders can use to practice the fishing strip strategy to gain the experience to deal with some of the nuances of trading and the uncertainty that affects all traders, no matter what degree of trading experience they possess or how well-funded their trading accounts.