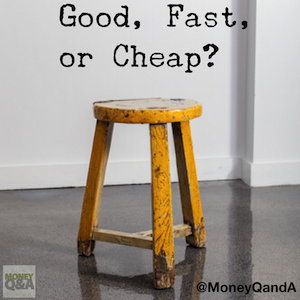 Most of us have heard the old adage about the three legged stool analogy. It’s often referred to when buying products, both large and small.

You can only get two out of three attributes in almost all cases. Good, fast, and cheap – you can only have two.

So, you have to pick. You have to compromise sometimes.

For example, you can buy an item that is made with great quality parts, and the company can ship it to you fast. But, it won’t come cheap!

Look at the way the US government buys big pieces of military hardware. They often accept the lowest bidder to build the gear. They’ve got the cost part of the equation down, but you must choose between getting it fast or having a lower quality product with parts that may go bad very quickly. You almost always can’t have all three.

Wal-Mart vs. Firestone Tires and a Mother

The other day a friend of mine told me that she broke down in the middle of Wal-Mart. She’s a single mother of a toddler and was feeling stressed.

She said that she originally had a coupon to save $30 on new a set of new car tires at Firestone. She desperately needed new tires.

But, she knew that if she went to Firestone to make the purchase and put the tires on, her toddler wouldn’t have much to keep him occupied for the hour or two while they repaired the car. And, anyone with small children knows how quickly a toddler’s attention span can run out.

So, my friend made the conscious choice to get her tires replaced at Wal-Mart while she shopped even though it would be at a higher price – believe it or not Wal-Mart isn’t ALWAYS the lowest price in town.

She also needed groceries and other household items anyway, and she could knock out two birds with one stone while Wal-Mart repaired her car.

But, while she was there, she couldn’t get the thought out of her head that she was spending more by taking the path of least resistance. She chose the quality of her hour or two of her life keeping her son calm at Wal-Mart moving around and looking at toys and groceries over the instead of the lower cost at Firestone.

You may also like to check out my review of Jet.com. You should also check to see if wholesale clubs are right for you and your family.

Don’t Feel Bad About Having To Choose

You shouldn’t feel bad about choosing quality or speed over price. There are more things to get upset about and more things that are important than saving money.

There you have it…a personal finance writer who says that there are more important things in life than saving money.

The problem is that we all know that. I’d trade an hour or two of quiet sanity over $30 cheaper tires in a heartbeat. I think that we all would when we stop to think about it and look at it subjectively instead of objectively about the money.

We can’t beat ourselves up over $30. We shouldn’t feel bad. We are our own worst enemies making ourselves feel bad over saving money – or the lack of savings.

It all just comes down to choice. What are you willing to give up? And, what is more important to you? If a screaming toddler isn’t’ so bad and you’d rather save your $30, then by all means, do that. But, if your peace of mind and happiness is worth that $30 or more, then don’t beat yourself up over it.

Three Legged Stool Analogy Is All Around Us

Speed, quality, and low price – you can’t have it all. You can only have two out of the three in most cases. When you stop to think about it, these choices are all around us.

My wife and I bought tickets to a baseball game. I’m a huge Atlanta Braves fan – although most years I don’t know why when you look at their record (like this year).

The speed of the tickets was the same. So that wasn’t an issue. But, the perceived quality would be the issue. On Sunday, we would feel rushed to make it home to Tennessee and rested for work on Monday.

We had to make a choice. Did we want to have the quality of our enjoyment suffer in order to score cheaper tickets to the baseball game? Or, were we content to enjoying a relaxing evening on Saturday despite having to pay more?

I’ll let you guess which outcome this personal finance writer chose. I also like to get tickets to sporting events and concerts for free.

Sometimes You Get All Three

Sometimes the stars align, and you come across a lucky situation when you find all three happen at once. Every once in a while it will happen – trust me.

During those instances where you have all three legs of the stool – cheap, fast, and good quality – take it to the cleaners! Jump on it, and ring the register. But, do it fast!

These situations will only come around every so often, and you have to be ready. Pounce on it. These are the times when we should be thankful for, be happy, and utilize. They are the times that karma is paying us back for only receiving two out of three for so long.

Don’t feel bad about the times you get all three things when you’re looking to buy something or are doing something fun. You just have to recognize it. You’ll very quickly be back to the land of only two legs of the stool soon enough.

What do you think? Should my friend have beaten herself up so badly over missing out on a $30 coupon? Do you consciously recognize that most times you can only have two out of three: fast, cheap, or good?

Or, is the three legged stool analogy a myth? I’d love to hear your thoughts in the comment section below.

5 thoughts on “Good, Fast, or Cheap – How the Three Legged Stool Analogy Impacts Your Finances”