The following is a guest post by John Jamieson, the author of Wealth Without Stocks or Mutual Funds. If you’d like to submit a guest post for Money Q&A, check out our guest posting guidelines. 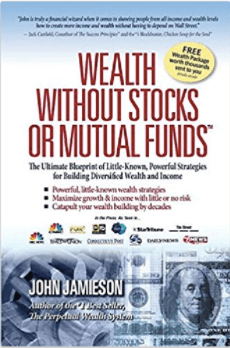 Almost 50% of Americans claim they would have a hard time getting their hands on $400.00 in an emergency. There’s a reason for that claim. It’s a broke personal finance model that makes that figure possible.

In October 2017, USA today published an article with a truly frightening statistic. According to the article, nearly half of Americans would be in trouble if they had to come up with just $400.00 in an emergency! If you’re reading this article, I would bet you’re not one of those people. Anyone who studies money and personal finance will almost always be doing better financially than people who never pay any attention to such things as money and finance.

As you’ll see, the article gives a couple reasons why many Americans are struggling with no net pay raises in about 30 years to a spending and not a saving public. I would argue that while those two facts are mostly true they don’t really explain why this figure is so staggering.

The truth is there are several factors, but one that is never discussed is that the basic personal finance structure we have been taught and all put into practice every day is in of itself deeply flawed. What system am I talking about?

Those numbers are rarely looked at and compared. And, yet there is where the biggest wealth suck of Americans is taking place. Banks are getting 40% of our income in the form of interest and principal paybacks on loans. If we can alter those numbers, we can change millions of Americans lives for the better, give them a nest egg they desperately need, and then expand to actual investing for the future.

In the broke business model (even if it worked well and we were putting away 10% on average), Wall Street gets 10% of our money usually in the form of 401k’s, IRA’s, or some other type of “qualified” account. And, the banks are getting over 40% of our income in the form of payments on houses, cars, credit cards, student loans, etc. Then, between federal, state, and local taxes, we are paying over 40% of the rest of our income in taxes. Now just spend a little extra for entertainment and to live and you are either broke or worse, you’re in the hole with credit cards.

What could we do differently? Let’s start to take over some of that money we pay to banks and pay ourselves acting as the bank instead. Let’s start to not put as much or even any money in the qualified plan world (yes blasphemy I know especially to the traditional financial world that helped get Americans into this mess) and start saving inside of a vehicle that banks themselves, big corporations, and famous family dynasties have been using for generations to grow and protect THEIR wealth.

Start to fund an “Investment Grade Whole Life Insurance Policy” either up front (if we have the resources) or monthly just like we invest in 401k’s. Investment grade whole life is different than traditional whole life that financial gurus have been warning the public about for 40 years.

Unlike those traditional policies, the investment grade life policy is designed to have high starting cash value from day one and is built to grow very well over time. There are also about a dozen other benefits of this type of account that space will not permit me to discuss right here, but please view this brief video explaining investment grade life insurance.

Now that we have one of those accounts set up, what do we do with it? One of the benefits of these kinds of accounts is the ability to access the cash value at any age, for any reason, without taxes or penalties of any kind. So, let’s assume we have been able to accumulate a little money inside this account over time and we need a solid used car for us or one of our kids. Let’s assume that car would cost $10,000.

Normally, we would of course sign on the dotted line and borrow money for 5 years from a finance company and walk out with the car. Now, look out five years from now and see what that did to you financially. The car is now worth $2,000 if you’re lucky. You have lost that $8,000 of principal never to be seen again, and the rest will be gone soon as that car continues to lose its value. You’ve also spent around $2,000 in interest to the bank, which you’ll never see again. So, you have lost $10,000, and the car is quite old. So, now what do you do?

If you’re like everyone else, you will go and repeat that insane process or train your kids to do the same. You’ll find another car and borrow money for it and let the depreciation and interest on the car savage your saving and wealth creation efforts without even giving it a second thought.

Instead, let’s borrow the $10,000 from our life insurance policy and structure a payment back to the policy just like we borrowed the money from the finance company. Now, fast forward over those 5 years and the car is still only worth $2,000, but everything else is different. You have recaptured all the lost depreciation inside the life policy because that original $10,000 is back in the form of available cash value inside your policy. You also paid the same $2,000 back into the account you were going to pay the other finance company, but instead, you picked up the interest for your cash value account inside of the life insurance policy.

So, instead of scenario number one where you have lost $12,000 and have a $2,000 close to junker car left, you now have the same junker car but about $14,000 of cash value inside your account. Why do we have more money in the account than we paid in ourselves? Because with an investment grade life insurance policy, the life insurance carrier also credited you interest during the time the loan was outstanding.

Now, you have the cash to go get another car if need be or even better. Or, try to keep your car for another year now that it’s paid off but keep making the payment to yourself like you still owed the money. This will allow you to actually start to put away money and grow wealth over time.