Note – The following post is part of a military personal finance bloggers #BRSBlitz education campaign and sponsored by USAA. All opinions are my own.

Time is running out for members of the military to choose whether or not they want to opt into the new Blended Retirement System (BRS). In fact, you only have until midnight TOMORROW – December 31st, 2018 to choose the BRS over the current military retirement plan, which is called the High-3 Retirement Plan.

And, of course, guys and gals like me, who have more than 12 years of service in the military aren’t eligible to opt into the new plan. 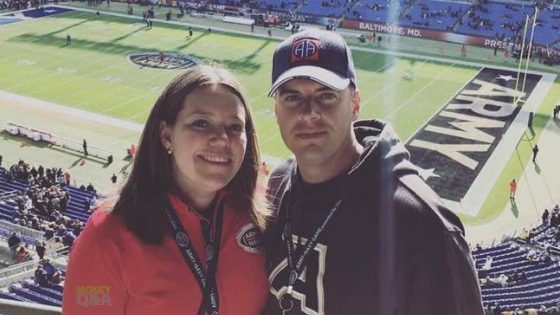 But, why the big #BRSBlitz push? Because far too many people haven’t opted into the new BRS retirement plan. Either they don’t know the benefits, are hiding their heads in the sand, or simply think that they’ll make it to 20 years under the current retirement plan for a bigger payday. The problem with that last piece of logic is that so few members of the military actually make it to 20 years of service and receive the 50% pension.

The new Blended Retirement System has seen a low number of people opting in., Recently, the military average was hovering at 16.5%, and it hasn’t gotten much better over the last few months despite the looming deadline.

It’s a big decision. You can’t change your mind and go back to the old system once you’ve joined BRS. And, you can’t join BRS after January 1st, 2019 either! So, it’s important to do your research.

Here are a few things that you should know about the new Blended Retirement System (BRS) versus the legacy High-3 Retirement Plan.

What Is the Military Blended Retirement System (BRS)?

On January 1st, 2018, the military retirement system changed to a Blended Retirement System (BRS). It decreases the traditional military pension from 50% of base pay to 40% for a 20-year career. Technically, the yearly multiplier changes from 2.5% per year of service to 2.0%, hence 40% versus 50%.

BRS also adds a matching and vesting schedule to the Thrift Savings Plan (TSP), the federal government’s version of the 401k retirement plan. The change only impacts those who joined the service between 2006 and 2017. If you joined in 2018, you’re automatically in BRS. If you joined before 2006, you can’t opt in and are stuck with the legacy High-3 Retirement Plan. 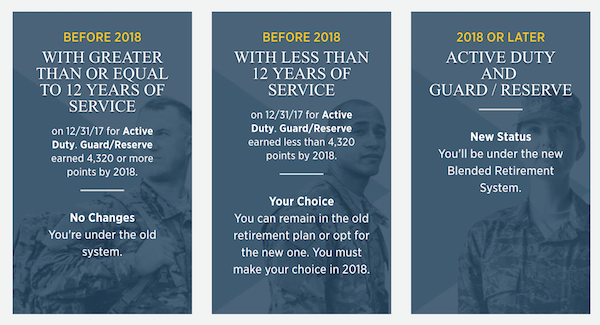 If you retire from active duty at 20 years under the BRS, you receive 40% of the average of your highest 36 months of your basic pay as your defined benefit. And, that percentage increases by 2% for each additional year of service.

The defined benefit has an annual cost-of-living adjustment (COLA), which means that it will keep pace with inflation. The COLA for the BRS is based on changes in the Consumer Price Index for Urban Wage Earners and Clerical Workers, as measured by the Department of Labor.

If you opt into the BRS, you can elect to contribute any whole percentage of your pay into your TSP, up to the annual limits set by the Internal Revenue Service (IRS). You will receive the Service Automatic (1%) Contribution, and Service Matching Contribution proportionate to your basic pay contributions, on the first pay period after opting in.

Being vested means that you have ownership of your investment. You are always vested in and entitled to your contributions and their earnings in the BRS contributions made to your TSP account.

Another great benefit of the TSP is that you can have TSP transfer part or all of your account into an IRA or an eligible employer plan (for example, the 401(k) account of a new employer) when you leave service. It’s portable. You take it with you when you leave the service whether that’s after your first enlistment or when you retire at over 20 years of service.

Service members enrolled in the Blended Retirement System (BRS) may also be eligible to receive a one-time, midcareer bonus payment in exchange for an agreement to perform an additional service obligation. This one-time bonus payment is in addition to any other career field-specific incentives or retention bonuses.

Which Retirement System Is Right for Me?

Which retirement system is right for you? Should you opt into the Blended Retirement System (BRS)? Or, should you stay with the legacy High-3 Retirement Plan?

That’s the million-dollar question that all of us military bloggers are trying to help you answer. Or, more accurately, it can be a multi-million dollar question. The stakes are that high.

And, the answer is that it’s hard. No one knows what the future holds. Many of us in the military would like to think (or actively do think or assume) that we’ll stick around for 20 years and receive the government pension.

If you could guarantee that you’ll still be in the military and retire after more than 20 years of service, then the legacy High-3 Retirement Plan might make the best sense. The problem is that so few of us members of the military actually make it to 20 years despite our best efforts.

You can’t see the future! No one can! If there’s the slightest hint that you might be getting out for one reason or another, voluntary or involuntary, the Blended Retirement System might be better for you.

You have the run the numbers. You have to do the math based on your own family’s financial situation. And, sometimes it’s not about the money – believe it or not.

Far too many people in the military are stuck in a job they hate simply because they are trying to hang on for the 20-year pension. Statistics show that only about 17% of servicemembers currently make it to 20 years to earn the pension.

This has even happened to me. I think that if the BRS had been around years ago, I would have left the military at the 8 or 9-year mark.

With the BRS, you have something that you can take with you. You have your TSP contributions and the matching contributions (up to 5% annually) from the government. That’s yours to keep.

So, which retirement plan is best for you? Like all things in personal finance, the answer is – It depends!

There are several BRS calculators out there that can help you crunch your own numbers. Each one has different strengths and inputs to help you calculate the differences between the plans. Here are a few of the most popular ones:

As the trusted financial advisor for the military community, USAA is providing advice, education, and tools to help military families navigate the changes between choose BRS or staying with the High-3 Retirement Plan.

Their financial advisors are also ready to help members understand how the changes will impact their financial security and how to prepare for retirement.

How to Opt Into Blended Retirement System

As, my friend Ryan Guina said in his recent Forbes article, the current generation of military members has an opportunity that only comes around once in a lifetime. Choosing whether to stay in the legacy High-3 Retirement or the new Blended Retirement System is a big decision. There’s a lot of money at stake. And, time is running out!

How to Tell If You Switched to the Blended Retirement System

Now that the opt-in period is over, many people are worried that they’re decisions have actually stuck. I’m not a fan of DFAS – not the people, just the system. I hate now one wrong keystroke can mess up your military pay if you’re not careful.

Here’s how to tell if you switched to the blended retirement system correctly and your decision was accepted into the military pay system.

You’ll want to check these each month to make sure you received the government contributions!

If you just switched to BRS in the last few days, you will have to wait a few weeks to see this on your LES.

You only have until midnight, December 31st, 2018 to choose the BRS over the current military retirement plan.