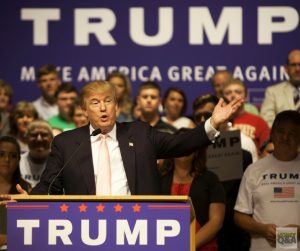 Since Donald Trump began running for president, stories of his many business successes and failures have taken a backseat to stories about his presence on the national political stage. Attaining billionaire status is no easy feat.

And, regardless of how you feel about potentially having a President Trump for the next four years, there are many valuable lessons related to personal finance you can take away from the Donald.

When asked about his wealth, Trump once said, “Money was never a big motivation for me, except as a way to keep score. The real excitement is playing the game.”

Trump indeed loved playing the investment game, and his venture into the Atlantic City casino biz was off to a roaring start in the early 1980s with the Trump Plaza Hotel and Casino. Under the Trump Hotels and Casino Resorts company, Donald Trump later bought a couple other casinos in the area in hopes of expanding the Trump brand.

However, he failed to account for the intense competition between casinos, and by putting all his eggs in one basket, he was then faced with the problem of his own casinos competing for the same customers. This problem led Trump Hotels and Casino Resorts to file for bankruptcy (Chapter 11) in 1991, 2004, 2009, and 2014 (it was renamed Trump Entertainment Resorts in between those bankruptcies).

You’re probably not planning on getting into the casino business anytime soon, but the lessons from Trump’s stumbles in Atlantic City are simple – diversify your investments. Rather than chasing after the hottest tech stocks or start-ups exploding with popularity, mix up your portfolio to protect yourself against potential losses from market ebbs and flows.

You can get better at “playing the game” with the help of a financial advisor. Or, you can check out robo advisors like Betterment, which use advanced algorithms to determine the best allocation strategies for your money based on your age and financial goals.

Trump has many failures on his business record, but he also has plenty of successes, as indicated by something he once said, “In the end, you’re measured not by how much you undertake but by what you finally accomplish.”

For example, Trump purchased his building at 40 Wall Street for $1 million in 1995 and after approximately $35 million in renovations, the building is now one of the tallest structures in New York City, and it’s worth over $500 million.

He was able to accomplish this real estate goal and many others, including Trump Tower in New York and Trump Hotel in Las Vegas, because he had a clear plan from the start and kept his eye on his return on investment (ROI).

Even if you don’t have millions of dollars in your bank account, the lesson here applies to everyone: set achievable goals for your finances. Whether it is saving for a mortgage down payment, saving regularly for retirement, or paying off debt within a specific timeframe, you can set goals for your finances and stick to a financial plan to make those goals a reality.

Donald Trump wouldn’t have ascended to the billionaires’ club and become a household name if he hadn’t taken risks throughout his business career. However, there are quite a few ventures Trump tried out that indicate he would have been better off following his own advice, “Sometimes your best investments are the ones you don’t make.”

Things like Trump Steaks – an unpopular enterprise that only lasted 5 years and garnered 51 health code violations – or Trump University – which was open for just 6 years and is the defendant in a few ongoing lawsuits – are a couple examples of when Donald Trump took risks without doing much research on the plausibility of these investments beforehand.

Learn from Trump’s mistakes by doing more research on your own investments before pouring your money into anything. Billionaires can afford to lose money on failed investments. But, if your savings or retirement funds are on the line, then why leave yourself vulnerable?

Don’t be like the hordes of investors who pounced on Nintendo stocks when Pokémon GO first came out. They later only realized that Nintendo didn’t actually own the game. Instead, research your options, read some investment newsletters or blogs, talk to a financial advisor, and don’t be afraid to take some moderate risks. Risks are okay as long as you’re well-informed about the positive and negative consequences and have time to make up for the losses before you retire.

Bouncing Back from Bankruptcy

Trump has dealt with bankruptcies four different times before. And yet, he’s still unbelievably wealthy and successful.

If you’re struggling with your finances and considering filing for Chapter 13 bankruptcy or you’ve already filed, then remember that bankruptcy isn’t the end of the world. If or when you file for bankruptcy, you’ll be able to get the relief from debt burdens and creditors that you need without lifelong consequences. Bankruptcies usually disappear from your credit report within seven to ten years.

There are ways to bounce back from a bankruptcy and rebuild your credit. You can bounce back by getting a secured credit card, monitoring your credit score on sites like CreditSesame.com

, and remembering to make payments on time with useful apps like Mint.

It’ll take some time and effort before you see your credit score go up again. But, it’ll be worth it once you’re out of the red.

Find Joy in Your Work

Too many people live paycheck to paycheck, not really loving their jobs but sticking with them because they pay the bills. Instead of focusing solely on the money, consider this quote from Donald Trump, “If you’re interested in ‘balancing’ work and pleasure, stop trying to balance them. Instead, make your work more pleasurable.”

Regardless of how you feel about Trump running for president, you have to admit, that’s some pretty solid advice. The economy is improving, after all. And, with the current unemployment rate hovering at an impressively low 4.9%, there are several opportunities out there to find more fulfilling work if you’re not thrilled about what you’re doing now.

Don’t get stuck in a job you hate. Find ways to beef up your resume and branch out, whether that entails taking new college classes, taking on a part-time job that fulfills you as an employee, or switching careers after you’ve built up a decent savings to tide you over during the transitory phase.

If Trump can run for president while managing multiple corporations and his own international brand, then anything is possible.

For all the hype and criticism of Donald Trump lately, it can be hard to shut out the political noise and focus on the real-life lessons we can learn from the Donald. Politics aside, Trump has undoubtedly had a pretty interesting life.

Whether you take away something from his careful financial planning in the real estate market or something about measuring risks from his business busts like Trump Steaks and Trump Ice, Donald Trump’s life is a treasure chest full of personal finance lessons that anyone can apply to their own lives.

What do you think? Can we learn something from Donald Trump and apply it to our personal finances? Did I miss any? 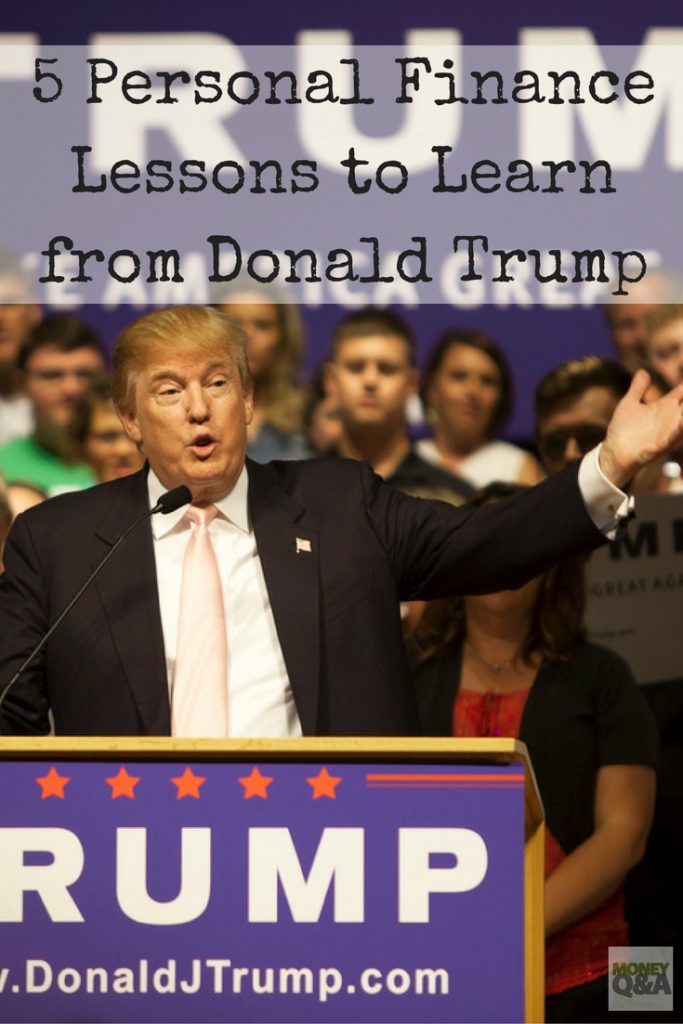