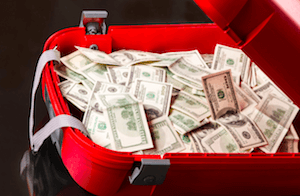 Whether claims are due to natural disasters or man-made ones, the insurance industry has had several huge payouts to make over recent years. This list sums looks back at some of the biggest insurance payouts.

There has not been a figure set in stone as to the amount lost in the 2008 banking collapse, but billions of pounds is a conservative estimate. While the exact figure may still be unknown, what is known is the knock-on effect of bailouts and unemployment has caused the insurance industry to lose out in a big way.

A natural disaster of catastrophic proportions, when Hurricane Katrina ripped through the American south in 2005 – in particular New Orleans – it was a game-changer for insurance companies. In total, they had to pay out an estimated £78 billion.

The September 11 terrorist attack which occurred in 2001, in New York, and destroyed the World Trade Centre’s twin towers is a tragedy that will hopefully never be repeated. Claims for the likes of business interruption claims, property damage and life insurance amounted to £25 billion in total – making it as expensive as it was catastrophic.

Originating in Mexico in 2009, fears of swine flu swept the globe as the year went on. In the UK, the threat was taken seriously and millions of doses of anti-virals were produced for the epidemic. In the end, 457 people in the country died with a total cost of £1.24 billion recorded.

The highest damages cost resulting from a car crash were awarded in 2012. A young student lost her mother and was paralyzed in an accident with a total £23 million awarded to be paid to her throughout her life.

In 2001, a man crashed his car into an oncoming train having fallen asleep at the wheel. His insurers were sued for £7 million after 10 died and 70 were injured in the incident.

A man in Virginia successfully sued his landlord after he slipped on a frozen driveway, with medical complications stemming from it. He was awarded £4.7 million.

One of the most difficult volcanoes to pronounce hit the news in 2010 when it erupted and left an ash cloud lingering over Europe for several weeks. No-one was directly killed or injured, but around £2 million was paid out to cover cancelled flights and hotel losses.

Mr Bean, Rowan Atkinson’s beloved sitcom character, was famously cumbersome. He probably racked up plenty of damages in his various escapades, but the actor himself crashed his McLaren F1 supercar and commanded a huge £910,000 insurance bill off-screen.

Supercars are out of the reach of most of us with the astronomical cost needed to buy some models more than many people earn in a lifetime. Of course, with the high initial expense comes the risk of a hefty insurance payout. The friend of one Zonda owner managed to smash his car so much that it needed to be sent back to Italy for repair – at the mere snip of £300,000.

Keep up with the latest happenings in the world of insurance at Lloyd’s of London’s news section.