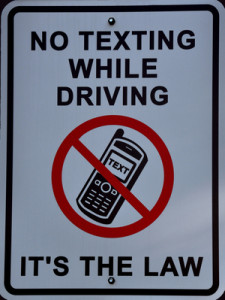 I am of the belief that Americans look the other way and really do not care about people who are texting while driving. Despite it being illegal in 38 states across America, we have done little to nothing to stop the rising trend.

A survey released by State Farm in November 2012 found that 68% of drivers ages 18 to 29 text while driving, up from 64% last year, and 48% of them access websites from behind the wheel.

Even though 76% of teens between the ages of 14 and 17 agree that motorists risk their lives by texting while driving and 93% believe that an accident is inevitable among drivers who text, we still do little or nothing to change our behavior.

Another study found that 37% of drivers over the last two years admit to reading updates from social media networks such as Facebook and Twitter while driving, and 33% update their status while driving.

Using a handheld device while driving increases your likelihood of an accident by over four times the regular rate of having an accident. So, how do we implement real social change? Do we even want to change? I know one way that we can really make a change in America to society. Hit people where it hurts! In their wallets!!

Simply knowing that something is dangerous is not enough to change our habits. It is ingrained in our very fabric of society. We don’t want to change, and nothing is forcing us to change our ways. There is no incentive to change.

But, what if the financial penalty for texting while driving forces us to change our behavior? In Virginia, reckless driving is a misdemeanor which goes on your permanent criminal record and carries a maximum fine of $2500 and up to 1 year in jail.

Small penalties like the ones in Virginia are not making a dent in the issue. If you want to teach people a lesson, car insurance companies should refuse to payout a claim for accidents caused by texting while driving or even caused by DUI and other illegal activities for that matter. That would get an immediate and dramatic reaction.

The results of a car insurance company denying a claim would be dramatic and devastating that would trickle down to second and third order effects.  The effects would ripple through the parties’ lives. Victims would sue perpetrators

Those responsible could see themselves financially ruined and possibly have to declare bankruptcy. I know what you are probably thinking. That is super harsh, and it is.

But, how many national stories would it take of the devastating effects for it to hit home across American and affect serious change? It wouldn’t take many. Unfortunately, the first few would feel the brunt before the rest of us got the message that this is truly a serious issue that needs to be addressed.

Why The Car Insurance Companies Can’t Help Much

Car insurance companies are doing as much as they can to help drivers break the habit of texting while driving. They are in the forefront and industry leaders in public service campaigns, sponsoring school education programs, and the like. But, unfortunately their efforts have not be enough in the past to stem the tide that has be building. That’s why I asked the hard question about denying car insurance claims.

Since I’ve been blogging a long time and have friends throughout the community, I asked few contacts at USAA and the insurance world about texting while driving, DUIs, and paying claims for illegal activities. Here’s what they had to say…

Why do car insurance companies pay a claim for damage caused by an illegal act? For example, if I am texting while driving which is illegal in NC and wreck my car, USAA and other insurance companies will still pay my claim. Why? Why not take a stand and deny the claim in an effort to change drivers’ behavior for the greater good? The same could be said for DUI.

And, USAA’s Director of Military Communications and spokesman, John Hancock replied, “Auto insurance is designed, and priced, to cover for covered losses from an ‘accident’, not from ‘intentional’ acts.

Although certain actions in the vehicle may be illegal, such as texting while driving in certain locations, usually the driver wasn’t intentionally trying to cause the accident. Although this is risky behavior, and illegal in some cases, the resulting accident was still not considered intentional.”

“At the time of the reported accident, investigations associated with any potential illegals acts, such as driving while under the influence of alcohol, are still ongoing and could take many months or even years to prosecute. In the mean time, it is the responsibility of the insurance company to pay for any covered repairs from the accident in a reasonable time frame,” said Hancock.

And…“Lastly, even if insurance companies were to include a provision in the auto insurance contract that excludes coverage from accidents caused by illegal acts, in many cases it would be very difficult for the insurance company to prove the illegal act and the direct causation to the accident.”

The response from Michael Berry, Vice President of the Insurance Information Institute (I.I.I.), to me was also along the same lines as USAA. He told me, “A standard auto insurance policy’s exclusions, meaning circumstances under which a policy will not pay out, usually focus on instances in which an intentional act caused either bodily injury or property damage. Accidents caused by a motorist who was either texting or driving under the influence are generally covered by insurance policies because they are deemed unintentional acts, even though law-breaking may have contributed to the incident.”

The Insurance Information Institute is like an insurance industry specific think tank which is a source of information, analysis, and referral concerning insurance matters.

USAA believes that while people acknowledge that they know distracted driving and texting while driving is dangerous, they are actually willing to change their habits. According to studies cited on distraction.gov and personalinjuryguide.org: 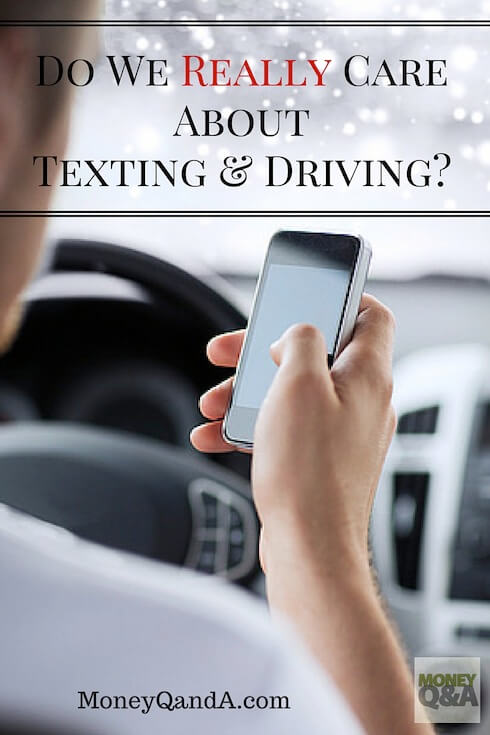 You can read the USAA Educational Foundation brochure about distracted driving and take the pledge at: https://www.usaaedfoundation.org/Safety/safety_566_distracted_driving