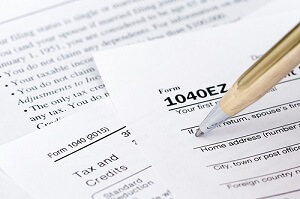 We’re in the thick of tax season, and if you’re having anxiety about handling what you owe whether personally or for your business, you’re not alone. You’re not alone if you think, “I can’t pay my taxes”. If you’re expecting to owe a large sum to the IRS by the April 15th deadline, and know you’re not going to be able to pay off your debt, there are various ways to approach your situation.

Even if you can’t pay what the IRS expects of you, you absolutely need to make filing a priority. While the date usually falls on April 15th, this year is a bit of an anomaly, with a filing deadline of Monday, April 18th. With this deadline only a month away, time is of the essence, and the penalties for missing this filing date can be pretty severe, at least from a financial standpoint.

The maximum penalty can add up to a massive 25% fee on the total cost of your debt if you don’t file within the five months following the deadline, in addition to the interest, the initial amount will gradually accrue as long as it takes you to pay back. By filing prior to the deadline, you can avoid this steep penalty fee, and the IRS will be more willing to work with you.

Can I Use Credit to Pay?

While not always the most viable option, there is something to be said about using your credit card to handle a debt to the IRS that would go unpaid. You’ll need to determine whether the interest on your card is higher, or whether the interest charged by the government would be more desirable.

In most cases, a credit card has lower rates than what the IRS enforces in efforts to get their money. If you can’t put the entire debt on your card, you can make a partial payment and avoid penalty fees and lessen the amount of interest you’ll pay over time. The IRS interest rate comes in a half of 1% each month, and continues rising until it hits the maximum of 25% during the following 50 months.

The IRS does accept credit cards, but be aware there’s a fee for using one of the approved processors, which depends on the processor chosen. Right now it looks like Pay1040.com is the cheapest processor, charging a 1.87 percent fee on your transaction.

The Deal with Offer in Compromise

You might have heard about an offer in compromise before, and if you’re struggling with a debt that you don’t think you’ll ever be able to pay off, this could be the answer. If you can prove to the IRS that you’ll likely never be able to pay off the entirety of your debt, they might be willing to compromise with you and absolve a portion of your debt to ensure they get as much from you as they can.

It’s not easy to secure these offers. But, if you can prove that either your tax liability was calculated incorrectly, that being forced to pay your debt would cause impossible economic hardships, or that you’ll simply never be able to pay the full amount, you may have a chance.

An Extension on Your Payment

You might also qualify for an “undue hardship” extension. If you can prove that paying off your debt in full would cause impossible financial struggle, the IRS may be swayed to allow an extra six months for you to pay off what you owe.

You’ll still have to pay the interest that comes with an extended payment period, but you won’t be charged a penalty fee for paying late. This is extremely hard to prove, but is known to happen, so if you’ve got the proof, it’s time to pull it out.

The Help of a Professional

It can be hard to determine whether or not to hire a professional accountant, but in situations that could land you in trouble with the IRS, it’s essential. If you attempt to use debt relief services, you’ll want to seek guidance to ensure your success.

Professionals well-versed in the ins and outs of the tax system are your best bet for obtaining any of these initiatives, and using help from a company like Community Tax might see you paying a smaller amount of your debt than previously stipulated.

Have you ever had a big bill that you owed the IRS? Did you ever think, “I can’t pay my taxes!”? How did you handle it?