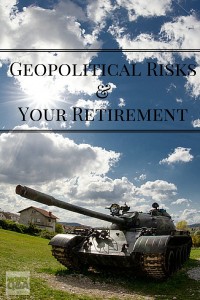 Your retirement account is most likely the most important investment account you’ll ever have. The reality is that we work incredibly hard to retire; spending the vast majority of our lives working and saving so that we can enjoy our golden years. However, in times of geopolitical risk, unrest, and war, several people lose everything they’ve worked for; forcing them to work long into their retirement years.

The threat that geopolitical risk and unrest is becoming to retirement investments and how converting your 401k retirement plan and other qualified retirement accounts to gold can help protect everything you’ve worked for.

Is Geopolitical Risk A Danger To Your Retirement?

However, Russia claims that they have legal rights to the strategic land. As a result, months ago, Russia brought troops to the Crimea Peninsula. Since this move, we’ve seen military action from rebels and Russia and corresponding responses from Ukraine.

In an effort to end the crisis, the western countries have imposed sanctions on Russia for their aggression toward Ukraine. In response, Russia refused to trade many food products with western countries; ultimately leading to more financial troubles for the Eurozone.

In the beginning of this conflict, it was a major part of the stories we heard in the news. While news coverage has died down a bit, the conflict between the two countries is very much alive.