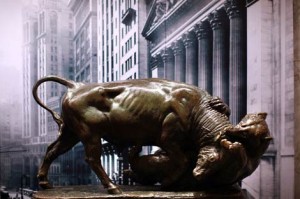 With the stock markets currently all over the place lately, there have been plenty of talks about recessions, bear markets, double dips, and tons of other financial vocabulary words that are thrown around. But, what is the definition of a bear market? How do you define a recession? It may not be as easy as you think. You may actually not care either.

What Is The Definition Of A Recession?

What Is The Definition Of A Bear Market?

Like the definition of a recession, there is no standard definition for a bear stock market either. Investors and stock traders tend to refer to the stock markets as either a bull market or a bear market. Many investors also tend to classify themselves as a bull or a bear as well depending on where they feel the stock market’s prices are heading in the future, either short-term or long-term. A bear believes that prices will decline, and a bull believes that prices will rise. The markets received these nicknames because a bull tends to spear things with his horns thrusting them up and over his head. And, a bear tends to rake things in a downward motion with its claws. Historically, a bear or a bull market has loosely been defined by 20% swings in the market. Now, this is not in one fell swoop but rather taken over a long period of time. For example, the most recent bear market of 2008 is considered to have started on October 9th, 2007when the Dow Jones Industrial Average was 14,164. It then ultimately fell to 11,100 by July 11th, 2008 which is the 20% decline which defines a bear market in today’s sentiment.

Recession? Bear Market? Should You Care?

I understand that a lot of people are hurting out there. Unemployment continues to be at a recent high, credit card debt is rising, and the stock market continues to see down days of 100+ points. But, should we care if we are in a recession again? Should we worry if this is another bear stock market? Most likely the answer is no. If you have decades away from needing your money that you have invested for retirement, for instance, then there is no reason to panic. In fact, I look at the stock market’s recent declines as a buying opportunity. Those of us with years left to invest and save for retirement and other financial goals can wait this current bear market out, scoop up good stocks that are cheap, and reap the rewards years down the road.

According to data complied by the investment management arm of USAA, the financial services giant that manages banking, investments, and insurance for US veterans and their families, some countries abroad may already be in a recession based on the popular 20% decline definition of a recession. Japan has dropped 21%, Germany is down 33%, and France has declined 34% from the high points of earlier this year. However, both the U.K. and the U.S. are both down 17% from their peaks attained earlier this year.