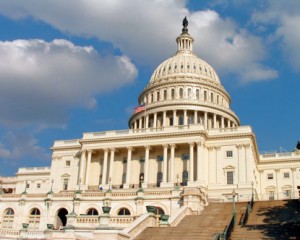 If the US Government does not raise the federal debt ceiling limit by its deadline, there will be serious repercussions felt throughout the American economy and around the world.

Many people are fearful of the results that could take place if the debt ceiling is not raised. But, there are several things that you can do in order to ensure that your personal finances are in order should the United States government default on its debts.

How To Protect Yourself from a Debt Ceiling Default

Stick To Your Budget

One of the best things that you can do if the United States government defaults on its debts because of failing to raise the debt ceiling limit is to stick to your monthly budget. You should have a written monthly budget already, and a time of crisis where the world financial markets may see disturbances is not a time to deviate from your budget.

Dave Ramsey is famous for often saying that you need to have a plan for every single dollar of income that you earn. Every dollar needs to have a name whether it is allocated for rent, electric, credit card debt, or something else. You should know where every dollar is going before the month even begins. Now is the time to stick to your budget.

One of the worst things that you can do is panic during a financial crisis. We all saw it during the 2008 recession when housing prices and the stock market tanked. Investors ran for the hills and withdrew their investments in record numbers even from their retirement accounts.

There was a huge flight by investors from equities to bonds and cash during the last recession, and there is a huge risk in doing this. Selling your investments in a panic for safer options will force you into selling at a low point in the market which is contrary to the number one rule of the financial markets, “Buy Low, Sell High”.

The best thing that you can do if the US defaults on its debt is to continue your current investing plan. You will be able to buy new stocks and mutual fund shares at bargain discount prices. I love when the market tanks because everything is on sale!

In addition to sticking to your monthly written budget, it may be a good idea to stockpile a little bit of cash in the event of a US default. Now, I’m not saying that you need to run out and buy gold or keep your money buried under the mattress in your house. But, there has never been a better time to have an emergency fund in place. Most professional financial planners recommend saving three to six months of living expenses in an emergency fund.

4 Reasons Not Raising the Debt Ceiling Would Be Bad

a reader sent me an email asking why not raising the debt ceiling would be a bad idea. This obviously is a very hot topic right now with Congressmen fighting in Washington every day on the subject of the debt ceiling. I’m not a big fan of politics, but I wanted to point out a few of the repercussions that we all could see in the near to mid-term if our elected officials fail to act by the August 2nd deadline.

If the debt ceiling is not raised, the US will technically be in default of some of its loans, its bonds. The negative implications of defaulting will have far reaching aspects. It will amount to more than just the Chinese government, who own $268 billion of US government debt, not receiving their investments back.

A default would hurt everyone and be felt in the pockets of every American as well. Many politicians are discussing a stop-gap measure that will prevent a default temporarily and the US Treasury said that other bills will go unpaid in an effort not to default on US bonds. But, debt rating agencies such as Moody’s have already mentioned that a short-term fix may still result in a downgrade of US bonds which will still have very negative effects on the market.

There are many bond funds in America that have stipulations from their investors and boards of directors that they cannot own bonds of a country or institution that has defaulted. Many will be forced to automatically sell those US government bonds. With the flood of bonds entering the market, prices will drop in order to find buyers for so many government bonds.

Bond prices and interest rates are inversely related. So, if bond prices fall, interest rates will rise. Bond interest rates, as most of us know, help determine the prices of other financial instruments such as the interest we pay on our car loans and mortgages. Our borrowing costs will increase as a result of bond rates rising.

4. Value of the Dollar

The value of the US dollar will tank versus every other currency in the world. It will become more expensive for importers to do business. Everything that we purchase from overseas manufacturers will be more expensive because the value of the dollar will fall. Think about how you would feel or react if the price of everything on the shelf of our stores went up overnight?

I know that the idea of increasing the limit on how much our country can borrow is not a popular one. I don’t want to be in debt, and I don’t want our country to be seriously in debt either. But, unfortunately, sticking our heads in the sand and refusing to confront the situation is not a viable option either as you can see by some of the repercussions that are listed above. We cannot continue to kick the can down the road for another generation to address later.

There is a lot of fear in the financial markets with the deadline for a resolution on the debt ceiling issue looming. It is very reminiscent of the recession of 2008, and there is a fear that panic can lead to rash decisions by people. The best advice is to shore up your finances by saving your money, staying within your monthly budget, and continuing to invest with your established investing plan.

What about you? Are you getting worried about the looming debt ceiling deadline? Do you think Congress will wait right up until the end to pass something?

Do you have a money question that you would like to ask? Email me your money, investing, retirement, savings, or other question to Questions [at] MoneyQandA.com. If I pick your question for the next article in the series, I’ll send you a free copy of Dave Ramsey’s book, The Total Money Makeover.