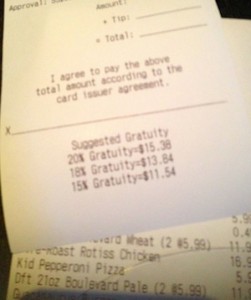 If you’re the owner of a small business that employs people who work for tips, your choice of payment system is holding their livelihood in the palm of your hand. A lot of considerate bar owners, restaurant owners, and more will think twice before they institute any changes that could adversely affect the people who work for them. This is both kindness and practicality.

If you can’t get the people working for you a decent living wage then they’re going to leave, you’re going to have high turnover, and everything that you wanted or worked for is going to blow up in your face. That’s not where anyone wants to be.

So, when you’re looking to trade out the clunky old cash register for something with a bit of a modern flair, you have to consider what it’s going to mean for everyone who depends on you to put some food on the table and let them pay their rent. Well, the results on mobile point of sale systems, credit card reading apps, and more are in and the results are only good.

Tips Fall When People Have to Do Math

If you run a bar, then you know this very well; when people get drunk, tips get crazy. They’re either way too high or way too low, and typically, they’re on the low side. Even drunk people hate doing math and want to save money. That’s why it’s so harsh to get a flat ten dollar tip after serving up complex cocktails all night.

It’s terrible when a drunken person tries to do math and ends up leaving you an 8 percent tip instead of a 15 percent tip. When people have to put in a lot of effort, good tips simply don’t happen. This is the first building block to explain why digital tips are so good when compared to traditional cash or write-in tipping methods.

When businesses make the switch to accepting credit cards for the first time or they change their credit card practices to more easily add tips (say, from making the customer write it in themselves to letting them either select a preset amount like $1 per tap or calculating options for the percentage of their bill (typically 15 percent, 20 percent, and 25 percent)), they see a sudden boom in tips.

Cab drivers in New York City reported a whopping 10 percent increase in their average tips, taking them from a shabby 12 percent on average to a city wide average of 22 percent, as reported by Bon Appetit. They’re not the only service industry to experience such a boom. Ice cream parlors, coffee shops, and more report record highs in profits when they let their customers tip digitally. These are great tipping tips.

It would seem that convenience is the true test as a method of tipping, and people are more than happy to be generous when it’s all so easy. This is good, especially since many restaurants are fighting to keep their prices low in order to tempt in business.

Of course, switching to a new mobile point of sale system gives you a chance to totally switch things up. Adding barcodes makes checking people out a snap, as you can barcode the menu and put in an order with a few taps of a finger or click of a scanner. This creates a digital paper trail which really works to discourage all forms of theft, from shoplifting and dine and dash to in-house, which accounts for a lot of shrinkage for companies according to Barcode Discount.

Plus, since these systems can often be keyed to the employees who are using them, you can easily pinpoint who is on shift when most losses occur. Just being able to do that reminds everyone that stealing a drink or a meal isn’t a victimless crime; there’s a lot of hard work involved in it that you can’t really deal with any other way.

As Slate points out, it’s a lot easier to tap your card than it is to fish out some change to throw into a jar. Increasingly, the ability to make money through tips isn’t going to rely on customers being willing to tip but on individuals and businesses being able to accept the form that their tips take. This means that upgrading what you can handle isn’t going to cripple your employees; it will open up more avenues of revenue for them.

No more will a cashless person have to wait to write in their tip or skip it all together, and employees can rest comfortably knowing that people are more likely to tip highly if they can get a machine to do the math for them. On top of that, you’ll have a new, sleek card reader and POS system that will let you keep up with the times.

However, you still don’t want to neglect those customers who still wish to pay via cash. So no matter how successful your digital payment systems work, you should not get rid of your more conventional cash drawers and the like. Integrating all your hardware with a POS system like Shopify’s makes it easy to keep everything together while still providing every payment service customers want.