Disclosure – This post contains affiliate links, and I will be compensated if you make a purchase after clicking on my links. 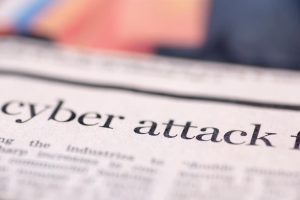 By now, you’ve almost definitely heard about the Equifax hack that impacted as many as 143 million Americans (that’s 44% of the country’s population!). If you have more than one credit card, loan, or recently had your credit report checked by a lender or landlord, there is a decent likelihood that Equifax’s massive security mess-up could involve you.

The problem is, after the news about the data breach was announced – months after the hacking incident occurred – there is lots of misinformation swirling around and Equifax’s widely unpopular initial response to the hack (making customers wait several days to see if they were affected and publishing legally suspect arbitration clauses in the terms and conditions) isn’t helping consumers figure out how to protect themselves from identity theft and credit card fraud.

Do you know what to do if you were affected by the Equifax hack? Here are 6 tips!Click To Tweet

6 Ways to Protect Yourself After the Equifax Hack

If you’re looking for the real solutions to the Equifax crisis, here are some ways you can protect your personal information and financial records from hackers:

Check to See If Your Information Was Affected

Equifax’s reputation has been pummeled on social media in wake of its response to the hacking because the credit reporting bureau reportedly won’t be contacting all consumers who were impacted by the data breach (even though most consumers don’t willingly send their information to Equifax in the first place).

Even if the website says you should be fine, it’s worth taking extra security measures because some Internet-savvy users have discovered (using fake last names and random numbers) that the data breach checker is prone to inaccuracies.

According to a recent survey conducted by LendEDU, over 50% of Americans have not checked to see if their information was affected by the hacked.

Put a Fraud Alert on Your Credit Report

By placing a fraud alert on your credit with one bureau, that bureau is legally required to inform the other two bureaus, so you only have to do this one time. You will need to input your personal information (name, address, contact information, Social Security number), but the process only takes about 90 seconds overall. Experian is the easiest credit bureau to file a fraud alert with because unlike TransUnion, you don’t need to create an account first, and unlike Equifax, you don’t need to worry about the security of your information as much.

Placing a fraud alert on your credit report is free and you can renew the fraud alert after 90 days (highly recommended since the hackers will likely wait several months before spreading the information online because they know most consumers won’t check their credit reports as often when the Equifax hack media hype dies down). According to a recent survey by CompareCards by LendingTree who conducted a national survey of 1,000 American adults who have at least one credit card or debit card found that only 25% of consumers have alerts set up on all of their credit or debit cards.

A fraud alert simply prevents new credit cards or loans being made in your name without your explicit approval first (you’ll be contacted to approve or reject the new line of credit). If you later suspect you’ve become a victim of identity theft, you can alternatively freeze your credit report for 7 years (note: fraud alerts and credit freezes do not impact your credit score!).

The same CompareCards survey above found that 78% of consumers have never put a freeze on their account. And, an astonishing 76% don’t plan on getting around to it anytime in the near future either. Baby boomers are the worst and most unlikely to use alerts. Over 46% of baby boomers having no alerts at all. But, Millennials are much more likely to take advantage of alerts, with 74% using some form of alert. 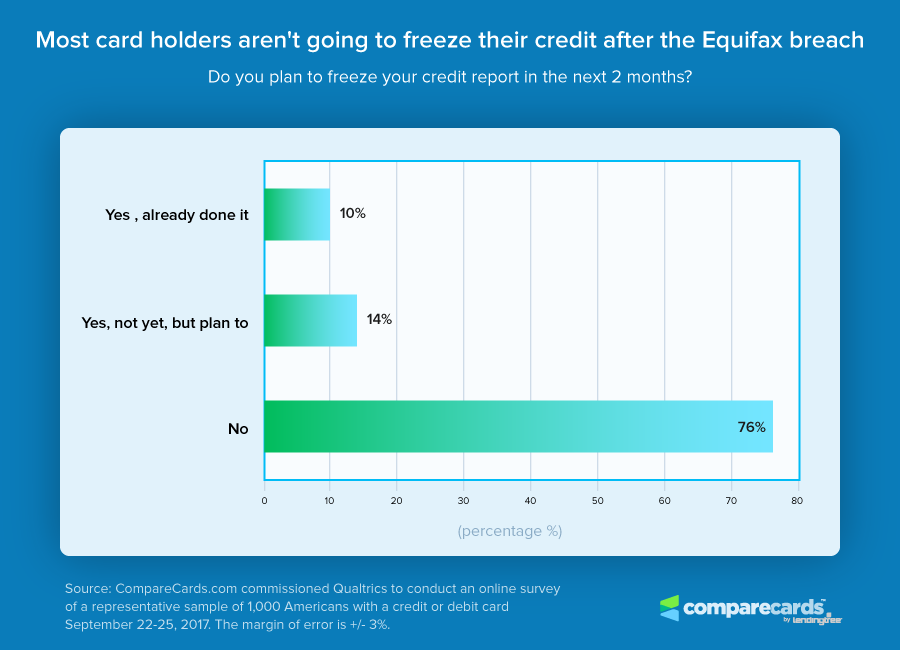 Your next step should be changing your passwords to your online bank, credit union, credit card, and investment accounts. It might seem like an overkill response, but given just how sensitive the information stolen by hackers is, there’s no such thing as too much protection in this instance. In addition to changing your passwords, you’ll want to visit the security and alert settings in your online financial accounts and tighten your alerts (e.g., notify you whenever a charge greater than $300 is made).

Requesting new debit and credit cards might not be necessary – the Federal Trade Commission prevents cardholders from being held responsible for fraudulent charges made as long as those charges are disputed within 30-60 days – but considering over 100,000 individuals’ credit card information was reportedly stolen in the Equifax hack, you should monitor your monthly statements much more closely over the next 1-3 years.

But, they prevent consumers from joining class-action lawsuits isn’t just anyone who wanted to check Equifax’s website to see if the cyber hack affected them. However, given that Equifax is not exactly a reliable source of information protection at the moment (and you could potentially benefit from a class-action lawsuit later), you might want to consider some alternative identity protection options.

You can also check out these offers for identity theft protection:

Monitor Your Credit Report Every Week

Credit Karma offers free credit monitoring services, and your credit reporting details are updated on a weekly basis. You can sign up for weekly emails to let you know if any suspicious activity appeared on your report and file a dispute with a credit bureau as soon as you notice something wrong. It’s important to remember that the hackers probably won’t act right away because they’re aware that consumers are doing everything they can to protect themselves immediately after the Equifax hack.

However, 3-6 months down the line, when Equifax isn’t in the news anymore, a lot of people will stop caring about keeping a close eye on their credit reports, which offers hackers the perfect opportunity to strike. This means that you should monitor your credit each week indefinitely (it only takes 2 minutes to log in and check, so you have nothing to lose).

With cyber hacking becoming an increasingly bigger concern for anyone who uses loans, credit cards, and online banking, it’s important to get our country’s digital infrastructure up-to-date so consumers can remain protected as hacking incidents get more sophisticated. Since Equifax was supposed to be in charge of millions of people’s personal data and failed to maintain the highest security standards with this information, you should write to your representatives in Congress to urge them to pass more legislation that would protect consumers in future data breaches.

The consequences of the Equifax data breach are not yet clear, but we know for a fact that almost half the country could be at risk for identity theft after one of the biggest cyber hacking incidents ever. It’s important to remain vigilant and be able to spot signs of identity fraud over the next several months (or even years) as our information is circulated around less reputable sources online without our knowledge.

By following the steps above, you’ll be able to minimize the chances of Equifax’s security meltdown negatively affecting you, but remember this is not just a short-term problem – instead, take this as an opportunity to start monitoring your credit and other financial accounts on an ongoing basis. 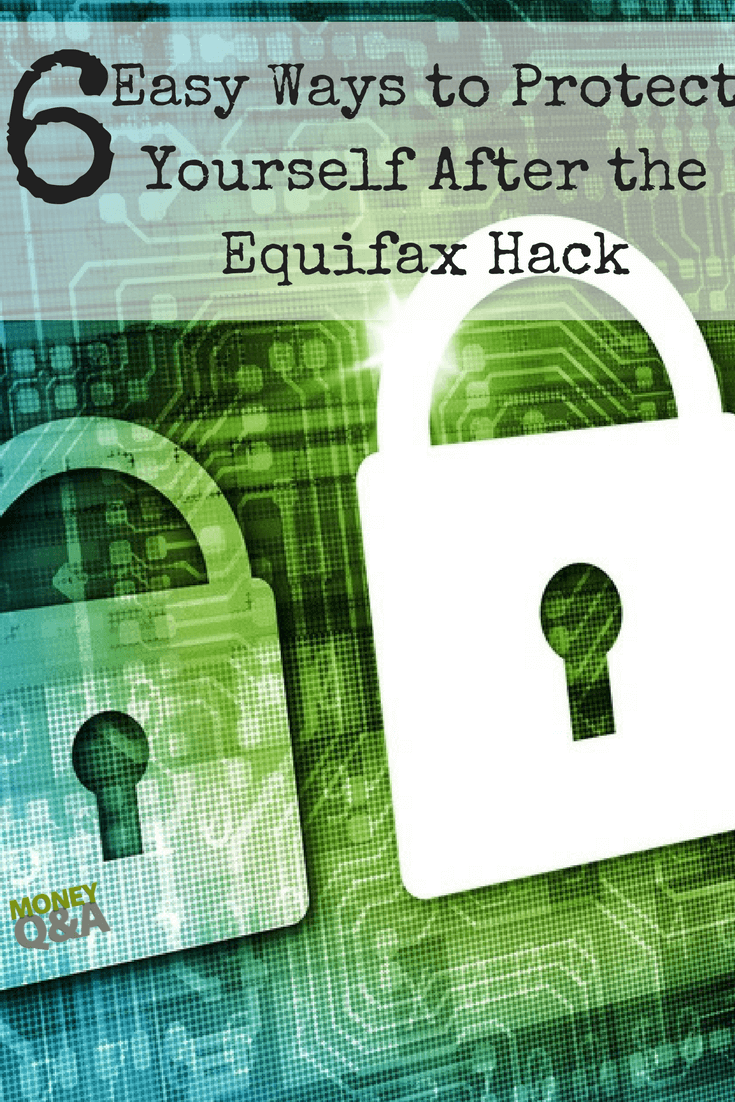