The following is a guest post by Piyush Patel, author of the forthcoming Lead Your Tribe, Love Your Work. If you’d like to contribute a guest post to Money Q&A, be sure to check out our guest posting guidelines. 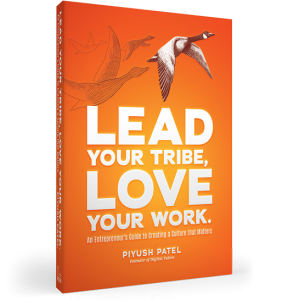 Sitting down around a table at the popular Bottega restaurant in Napa Valley, my executive team and I settled in for an evening of celebration. The last few months were a flurry of long hours, bug squashing and improving on our new streaming video platform. It felt good to take a step back and celebrated their hard work and a job well done.

This was about two years before Netflix offered their own streaming-only plan, so it was venturing into an unknown world. The influx of customers who had enjoyed our switch from physical discs to an online-only subscription model had suggested the gamble had paid off. Digital-Tutors was enjoying profits we’d never experienced.

As a new bottle of wine was poured, laughter and conversation flowed across the table. Everyone seemed to be enjoying their well-deserved offsite. That’s when Dana stood up and announced she couldn’t take it anymore—she quit.

Understanding the Rules of Your Game

There are some clear-cut rules in sports that everyone agrees to. There might be 29 arenas in the NBA, but the rim sits exactly 10 feet off the ground in each. No one questions the consequences of picking up a basketball and running down the court. Other sports have similar rules that define the game.

When an athlete steps onto the court, they’re agreeing to play by the same rules of the game as everyone else.

Like the athletes taking the court, your employees need to understand the rules of the game up front. They need to know how to play. This means clearly setting expectations up front. It also means putting systems in place to make sure you’re always adhering to those rules.

In the business world, the rules of your game are your core values.

Like athletes taking the court, when your employees walk into your office, there shouldn’t be any surprises about what’s expected of them each day. While sports have the benefit of being universally renowned—any basketball fan can fill you in on the rules of the game—the same isn’t true for business. New employees aren’t likely to know your core values, and longtime employees can always use a refresher.

A leader’s role is to establish those core values and ensure everyone in the company understands them.

Sticking to the Rules of the Game

How do you think a basketball player would react to their coach telling them only to swing at strikes? Asking a basketball player to play by baseball’s rules would cause chaos. The player’s reaction would probably start off with confusion before winding down the road of frustration as the coach continued to push these new rules. That’s not the game they signed up to play. It’s not the game they want to play.

As a leader, when you lose sight of your core values you’ll be susceptible to unwittingly changing the rules of the game on your team.

Dana’s announcement in Napa Valley blindsided me. Our company was more profitable than ever before, and the future looked bright for our new subscription-based business model. We’d established our core values years before and I was operating under the impression that everything was going great.

That evening, I sat down with Dana on a bench just outside of our hotel and had a heart-to-heart. As we talked, she unfolded a picture that didn’t match with what I thought was going on in my company. With Digital-Tutors growing in size to support our increasing customer base, that meant I was responsible for more families. Making sure we could make payroll each month was an ever-present concern. As a direct result, my focus shifted away from our core values, and instead I’d become more concerned with profits. It wasn’t a fast transition, but it was one my staff had clearly felt.

We might’ve been making more money than ever before, but after the chat with Dana on that bench in Yountville, my eyes were opened to a new perspective. It’s easy to hear what you want to hear, but Dana told me what I needed to hear.

Back to the Basics

The same principle applies to your business. Great teamwork can’t be achieved if your team isn’t playing by the same set of fundamental rules.

After my bench moment with Dana, it became painfully obvious that I wasn’t leading my team down a path of focusing on the fundamentals. She agreed to give me another chance, and I was determined to make it right. With renewed passion, I set up tools and systems to center our company back around the fundamental rules of the game—our core values.

Because of this simple formula, productivity soared, we had almost no turnover, and our culture became envied by anyone who encountered it. The byproduct of happy people in the company was that those people could focus on making our customers happy. The company exploded in terms of growth and profits in a way that I never could’ve imagined.

When your employees come to work tomorrow, do they know the rules to play by? Establishing your core values is a great first step in building a successful culture, but you can’t stop there. You’re the coach showing your employees the fundamentals of working for your company. You’re the referee responsible for making sure the core values are upheld. As a leader, it’s your role to make sure the rules of the game—your company’s core values—run through the heart of your business.

Piyush Patel, author of the forthcoming Lead Your Tribe, Love Your Work, is an entrepreneur and an innovator in corporate culture with more than 20 years of experience. As the founder of Digital-Tutors, a world-leading online training company, he has helped educate more than one million students in digital animation, with clients including Pixar, Apple, and NASA. A former Northern Oklahoma College professor, Patel grew frustrated with outdated training materials and launched a multi-million-dollar company from his living room. Patel has since given a TedX, won numerous awards acknowledging his trend-setting entrepreneurship, and continues to advise and speak around the world.